A week ago after much arm-twisting my hubby, we were able to go to Mega Mall.  Hurray! For I was able to go to Forever 21.
It really was huge and since it was a holiday, there were sooo many people that I couldn't go around slowly and choose more since my budget is also very limited.  I was in line for almost 1 hour just for the dressing room!  Because of so many people milling about (making me feel whoozy and not-so-happy), I only zeroed in on the stuff I put in my online F21 cart.  I got these 2:
From the Heritage line which is my fave: 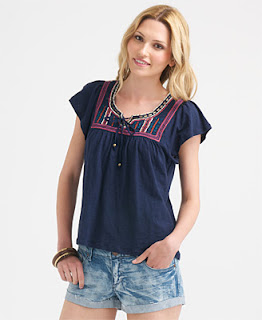 The Brian Lichtenberg nail polish tee for the polish addict in me! 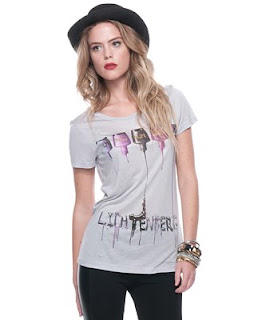 Hmmm turns out F21 sizes are now bigger than they were a few years ago so I now fit medium, ha ha.  All my other F21 clothes 3 -4 years ago were large (yes, I've been patronizing F21 since 4 years ago but I buy them all online then sent to a US address).  The prices of the local F21 wasn't really that cheap too, IMO.  I hope I get to go back there but that probably won't be in the near future (maybe next year as DH really hates going to Megamall).
I fervently wish they open other stores not located in SM (wishful thinking as they are owned by SM locally).
at 11:40 AM

That shirt with nail polish print is so cute... I want to have one too!!!

When I went there I just bought a pair of earrings and a ring, that time the place was so crowded that I wasn't able to fit those dress I like.. :( hope I could go back there!

I know what you mean, since my last F21 visit, I wasn't able to go back!

Elsa: I didn't buy any accessories coz I am allergic to costume jewelry :-( Dami pa nung polish tees when I was there.

Nikki: I want to go back!

I had the chance to visit F21 last July and I wasn't able to come back again. That time I braved the rain just to go there because I really wanted to see the store. Good thing I was able to buy a dress and a denim shorts. I am always checking on the facebook page and seeing the new arrivals makes me want to go back!

great items U got , Nikki. love the shirt :D